This blog contains posts by the creator of this website related to women's football. They may have something to do with statistics, but they might not in the slightest. This is a place where you'll find my opinion: you may agree or you may not agree, I'll happily discuss this in length with you on Twitter: @MaxKlaversma.

(You might find this blog slightly Arsenal- and Dutch National Team centric, for which I may or may not be sorry.)

Is there one World's Player of the Year? 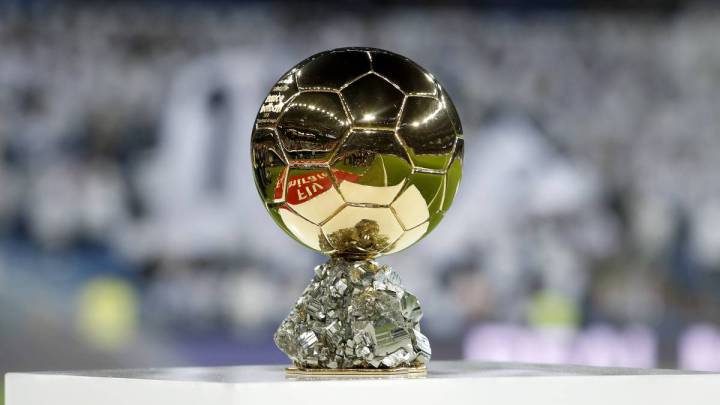 Over the course of the last months we've seen a lot of 'Player of the Year'-awards been awarded. Every year we see awards coming from the UEFA, FIFA, Ballon d'Or (France Football), The Guardian, and many more organisations. They claim to award the world's best player/footballer of the year. While the most prestigious awards went to Megan Rapinoe, other awards befell the likes of Samantha Kerr and Vivianne Miedema. But is it even possible to determine the world's best player of the year?

In no means meant to diminish the achievements of Rapinoe, but isn't it weird getting an award for player of the year when you've played just six games (452 minutes) for Reign FC (finishing 4th of 9) and scored no goals in those? Okay, club football works differently for the USWNT players, then let's look at those national team games: played seventeen games (1,078 minutes) and scored nine goals (granted, six of them were at the World Cup). Total of nine goals scored in twenty-three games (~0.39 goal/game, a goal every 170 minutes).

Megan Rapinoe is a great advocate for women's, LGBTQ+ and other minorities rights. She's clear in her views and opinions and in her advocacy to get others on board for these causes. This is something she (rightly) gets admired for: being a great athlete with her heart in the right place and active in getting those messages across. However, should this be counted towards the awards she's receiving? Had the awards been about the football/sports personality of the year, I would've wholeheartedly agreed with her receiving them all. She would deserve those 100%.


Is it even possible to determine who's the best player of the year? You can look at the pure numbers, deciding that Rapinoe shouldn't have won. You can look at what the players do outside of football and agree with those awards. In the end everyone will have their favourite player(s)...

My favourite player didn't win those most prestigious awards, but followers of my Twitter feed will know that I think she deserved them more... 🤷‍♂️


Some interesting views in COPA90's "That's the Tea"

How to make a marketing campaign backfire (instantly) 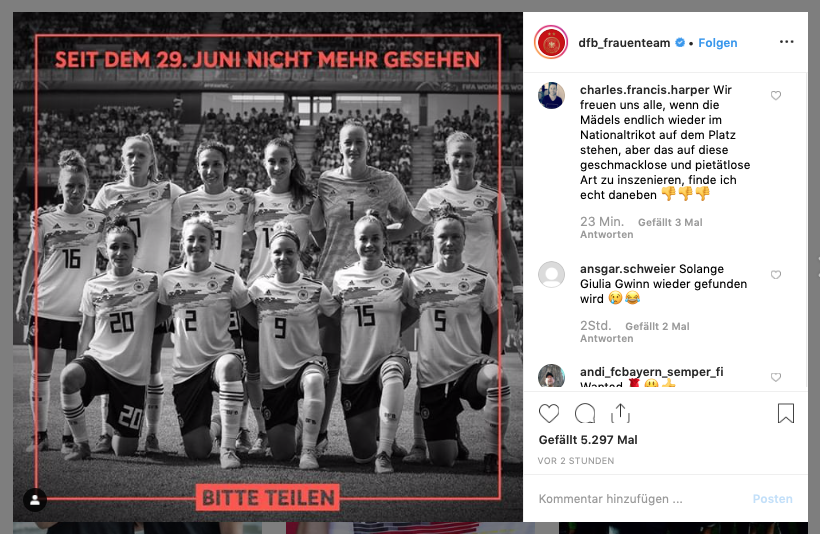 Today, the Deutsche Fußball-Bund (DFB) have found out how not to market the return of their (women's) league competition. In posts across social media platforms, they posted black and white pictures of their national team referring to being out of action since 29 June and the request to share the message. Now that in itself wouldn't really be a problem, the thing is that they framed the images as like a 'missing child/person' post with a headline 'Not seen ("missing") since 29 June', something you'd often see on posters like that. Aside from the main DFB accounts, national team players were provided with similar graphics to post as did the league clubs, be it in a different form (pointing towards their stadiums having been unused since the end of last season).

Unfortunate choice In no way will the DFB have meant any harm or offense with these posts. They were quick enough to remove them too when it turned out there quite some negative reactions too. They apologized, as did some players who (with the same proper intent) posted the images on their profiles. Though they meant no harm or offense, it makes you wonder who was around when this campaign was created or better said: was there no one around who could see the other side of this?

There are currently around 11.000 people missing in Germany, of which 7.000 under 18. What makes it even more unfortunate and distasteful is that only recently the women's football world lost Swiss international player Florijana Ismaili after been missing for several days in a swimming accident. If it couldn't be worse for this campaign, guess on what date that happened... indeed: 29 June.

Interesting marketing The DFB have done some interesting marketing with their women's team before. Ahead of the World Cup in a commercial with Commerzbank they pointed out in a great way how their sporting successes earned them little fame. In this new campaign they hint at the same point: after going out of the World Cup they disappeared from everyone's radar. Obviously a fair point to make, but you've got to think long and hard before launching such a campaign - sadly that either didn't happen, or people were just oblivious to how this could be interpreted in a different way than (I hope was) intended.

How the FA Player is a step forward (for me)

The FA announced today that all 132 Women's Super League games will be available to watch online via the FA Player starting this September. In addition to that, it'll have one live Championship match per round and highlights, top goals, preview, features and archive games available. Matches shown on BT Sport will be audio-only on the FA Player in the UK, but available with video outside the UK.

Response generally positive On the social media pages, I've seen a lot of positive reactions to this new project by The FA. It seems that most are on the same line as me: it makes it a lot easier for fans to follow their team (and others) from where-ever they are. Some of the content was already available via the social media pages of the league, other things I was able to watch on the BBC. But it means for me personally that I don't have to look for (dodgy) streams for BT Sport games, or even be unable to watch a game because it is not being broadcast.

Critisism: you'll never avoid it There have been some negative responses to this new project as well (as you can expect with any new thing). Most of these are to do with attendances at the games: 'the bums on seats'. After all, if you can just watch the games from your comfy seat at home, why would you take the effort of going to the games to see them live?

For a sport/league that is struggling to increase the attendances, it's a fair point to raise. Will it keep people at home who else would've gone to the game? Or might it increase the audience and attract more people to the games that way? It's difficult to argue on this point, as it might do the one thing for some and the other for others.

Personal take As foreign follower of the league, for me personally it's a great change in following the league. I'm not able to go to every game live, as it means hopping on a plane (hope it's on time), taking the train (again: hoping it's on time) and then using the London public transport system (for which I have no complaints). I've had a great time going out to Meadow Park (Arsenal's home in Borehamwood, just outside London) and the Emirates Stadium to watch my team play, but it's not possible for me to go to every (other) game. Instead of working my way through VPNs or dodgy streams, I can now just put on the FA Player and watch the games.

Let's give it a fair go before complaining. If people can't see it online/on television, would they know about the league? Would they know the teams they could go to? Also, don't forget: several teams have already said that they've sold more season tickets than last season.

How Vivianne rolled me into women's football 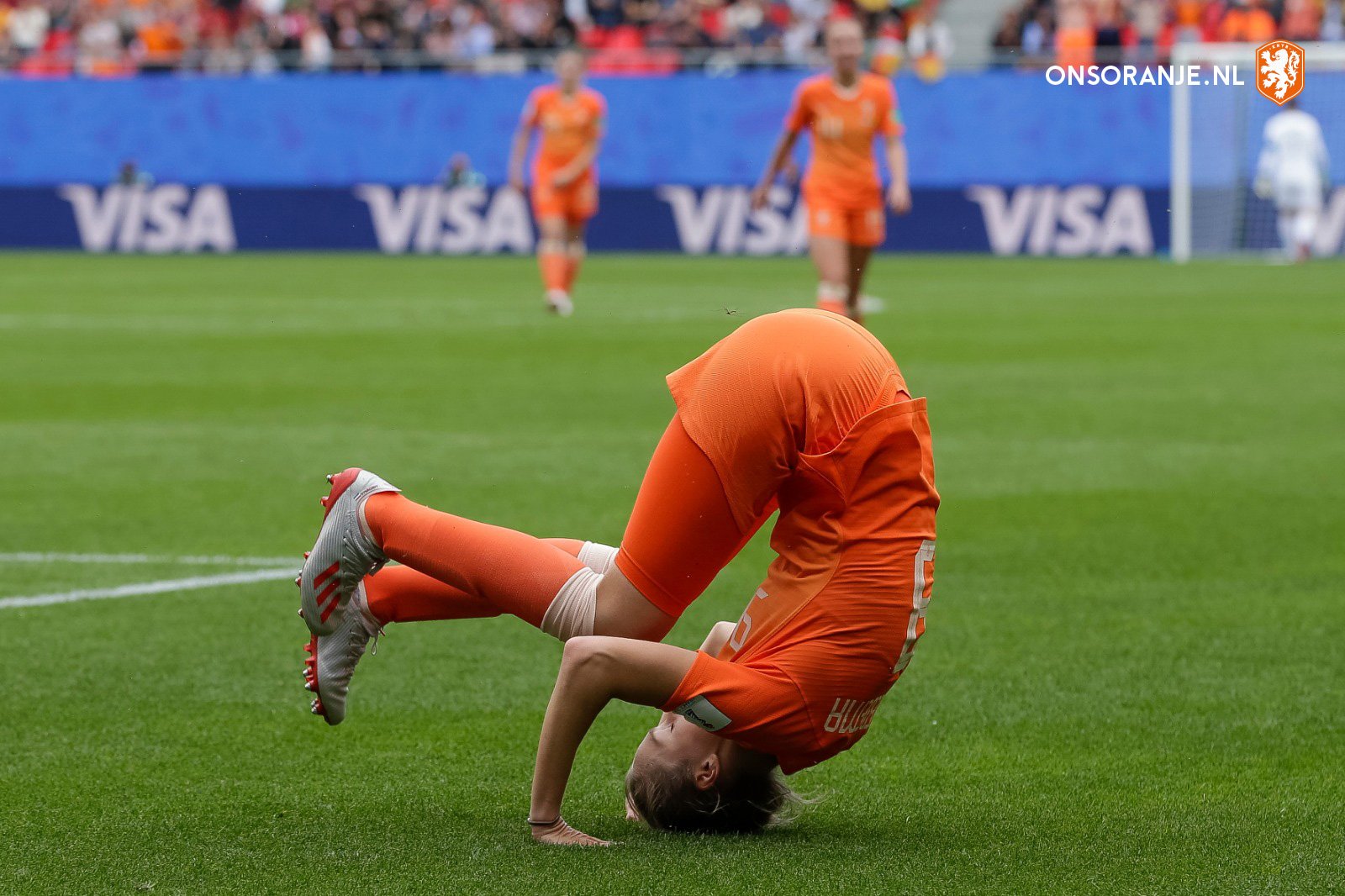 Not for a moment will I pretend to be a long-time follower of women's football. Like many Dutch followers, it has only been since the European Championships in 2017 that I've found my ("die-hard") supporters' sport in life. Sure, I had seen a bit of the previous World Cup and some domestic highlights from a few clubs - one of which Bayern München, but nothing that would qualify me as a women's football fan.

Prior to the Euros I had seen Vivianne in those highlight videos from her days at Bayern München. Great forward, but one many in the Netherlands either didn't know about or linked to disappointing performances at the World Cup. A World Cup at the age of 18 where the coach says all will be fine because "Miedema will score for us" and proceeds to play her while being injured/ill. Let's say the impossible expectations that were created were not met at that tournament.

The Euros changed just about everything regarding women's football in the Netherlands. An amazing tournament, amazing crowds and until now a lasting effect when it comes to support (both from fans and the association) for the national team.

During this World Cup there is quite some critique about the team, because most people feel that they don't play good enough in order to become World Champions. I'm afraid that at this point I agree, but I'm not one of those people who assumed we would just become World Champions because we are the European Champions. Also, the current performances are being compared to the knock-out stages of the Euros, whilst people forget the games we played in the groupstage of that tournament.

Expectations were different, but critics in those days were no fan of Vivianne. Former Dutch captain Daphne Koster remarked during the groupstage that it might be time for a different forward for the team. We all know how it turned out in the knock-out games that followed. While the critique on the team is stronger this tournament, I'm very happy to see Vivianne be the bright light both in her performances and in the reactions from the media, analysts and most of the fans in what is otherwise (by some) seen as a dark tunnel.

Also, in contrast to quite some supporters, analysts and talkshow guests, I'm a big fan of how she acts on and off the pitch. For me there is no need for constant (big) celebrations, those are for those extra special moments like winning the Euros final, securing the league win or getting the Dutch all-time topscorer record. You don't have to continuously smile, you're doing your job - are you smiling the whole day while doing your job? She's realistic, not concealing her feelings about a match when it didn't go well enough.

I'm very happy and privileged to have seen her win the Euros on television, to go to see her play in sold-out stadiums in the Netherlands for friendlies and World Cup qualification, to visit a packed Meadow Park in the most recent season and now to have gone to France to watch the game in which she broke the Dutch all-time topscorer record.

She's the person who got me into the amazing game and community that is women's football. She's got me to support the Dutch national team and the Arsenal women's team. A person who's been uninterested in football aside from watching the "mandatory" male national team games turned into a fan of the (women's) sport.

Is it weird for a mid-twenties man to be a fan? I don't know. Do I care? Not one bit. 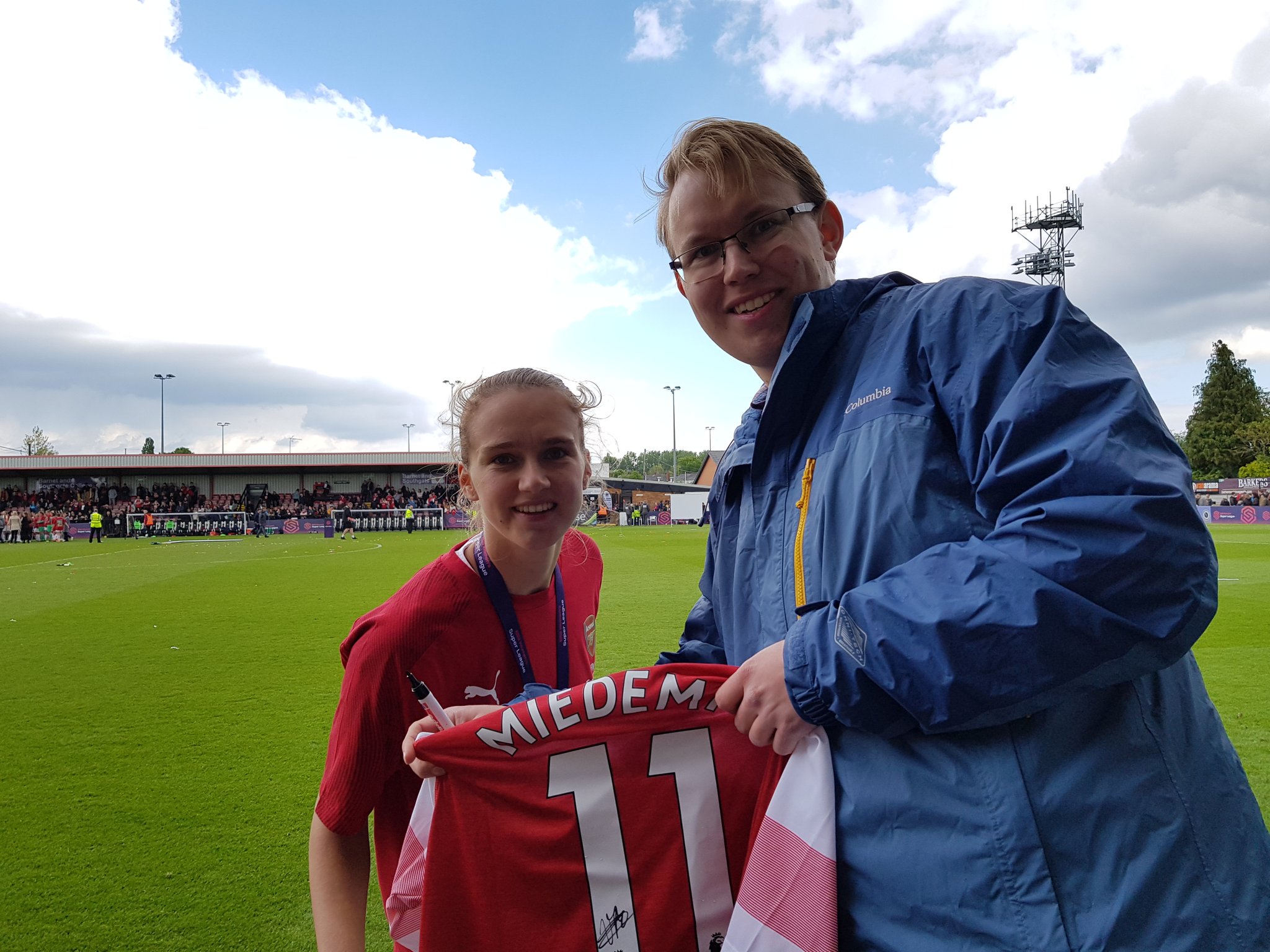